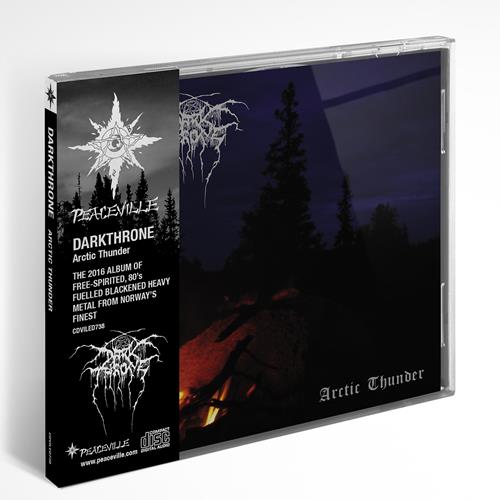 Norwegian duo Darkthrone began in the late 80's as a thrash/death metal act & progressed through technical death/doom metal experimentation to become legends of the black metal world and one of the original leading bands of the Norwegian scene, as well as inspiring a whole generation of metal bands.

They returned in 2016 with their first new studio material since 2013’s triumphant The Underground Resistance; the album becoming the band’s most successful release in recent years. The heavy metal odyssey of 2016, Arctic Thunder, far outstripped even The Underground Resistance and powered the band straight to the front of fans' and critics' wanted lists. The album became an instant favourite as Fenriz and Nocturno Culto once more showed their mastery of “the riff”, demonstrating why Darkthrone remain one of the most respected and enduring acts in the history of extreme metal.

An eclectic mix of free-spirited 80’s fuelled blackened heavy metal, all executed in Darkthrone's trademark raw and organic style, 2016's Arctic Thunder was recorded & produced by the band themselves, with the sessions conducted at Darkthrone’s old rehearsal unit "The Bomb Shelter", which they had originally used between 1988-1990. With themes based around hate, contempt, and the inner mind & soul, and with the notable presence of Nocturno Culto on vocal duties across all songs for the first time in recent years, Arctic Thunder retains a grim atmosphere, with a healthy dose of raw black metal inspired riffing permeating the album's 8 tracks. Mastering was again handled by Jack Control at Enormous Door.

The original 2016 CD edition having sold out, has been re-printed and is presented in a jewel case packaging complete with a 12-page booklet and OBI card.